Researchers at McAfee labs monitor Koobface activities 24/7 via custom honeypots and while reviewing one such update we noticed a variant that had debug/log features. Unlike the traditional captcha breaking technique to create new accounts, this variant of the worm converts the infected machine to a bot.

When we analysed the malware trapped in our botnet, we found that this variant of Koobface has a special feature for logging all activities carried out during the infection process in a log file . Log file is created under system root with date and time stamp for eg, C:\fb_reg20090612.log. 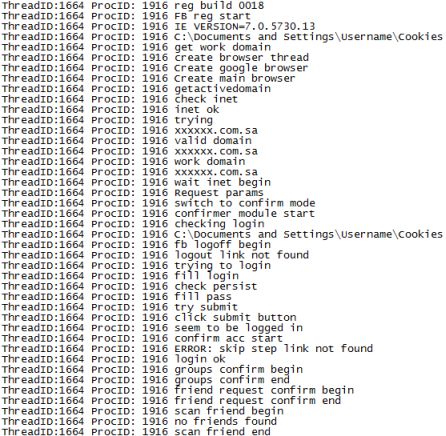 This particular variant of Koobface worm contains an encrypted list of compromised websites. It selects a random URL on every execution and sends a query to check if it is a valid domain. Upon getting response from the site, it posts a request to that site again to download its latest variant.

Koobface worm then requests for some more information from the compromised site like Login Name, Passwords, Birthday-Year, Birthday-Month, Birthday-day etc., which is used to login into Facebook account.

The screenshot clearly shows the request sent and response: 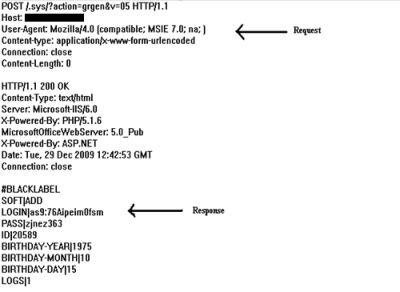 The worm saves the response received in another log file as below. It then tries to log on to the Facebook account using the logs. On successfull login it tries sending friend requests or scan friend lists. In case the credentials are not accepted, it terminates itself.

I have observed the same behavior in Twitter as well. I suggest not to click on links and other requests from unknown users and be careful with unusual messages from friends.