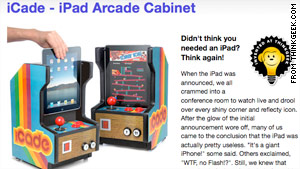 Games are big on the iPhone — the majority of apps on the App Store are games, and games are regularly among the top-selling paid and free apps.

With the iPad, Apple’s new, and larger, touch-screen device, gaming on Apple’s mobile devices is poised to get even bigger (pardon the pun).

But even with the touch screen and accelerometer inputs, some games just need more traditional controls, like those offered by joysticks or D-pads, those four-direction paddles on many video game controllers.

The question is, why aren’t third-party accessories available to give us this tactile control?

Apple itself may be getting into the gaming accessory business, if the details of a recently published patent application are any indication.

A group of emulator enthusiasts has already started limited production of a similar accessory for the iPhone and iPod touch. And, a fake gaming accessory from ThinkGeek has caused a major buzz on the Internet, enough that the company may be considering turning it into a real product.

Apple has filed a patent application, published on Friday, for an “Accessory for Playing Games with a Portable Electronic Device.” The patent was originally filed in September 2008, so clearly Apple has given thought to this issue.

The patent describes a device that a “portable electronic device,” such as an iPhone or iPad could slip into, and offer a user “a plurality of input controls that may be actuated by a user while playing a game.” The illustrations that accompany the patent clearly show an iPhone-like device connecting to the accessory via a dock connector.

The accessory could include any of the following: buttons, D-pad, joystick, a keypad, microphone, camera, speakers, and even a secondary display. The device could also offer a number of gaming related features, such as force feedback or streaming of video or audio to external devices. Apple also suggests it could include integrated memory for storing your “game progress.”

Apple isn’t the only one to be thinking along these lines. In May 2008, a group of hackers modified a SNES controller to work with a jailbroken iPhone over a serial connection, and built a prototype of what is now known as the iControlPad. The device is akin to a bulky iPhone case that adds a D-pad and four buttons that could be used to control games.

Over the last two years a few prototypes were made as the iControlPad was refined, and now a finalized version is being manufactured in limited quantities in the UK. One version even includes a built-in rechargeable battery to power an iPhone or iPod touch for “marathon gaming sessions.” (I would buy one just to play Space Miner without having to recharge every eight hours.)

There is also a developer’s kit, or SDK, that game developers can use to add support to the titles they make. The only problem is that it will only work with games made for jailbroken iPhones or iPod touches.
The numerous games from the App Store just won’t work.

The problem isn’t technological, though. Apple added an API in iPhone OS 3.0 to let accessories connected via the Dock connector to communicate with an app. Unfortunately, making such an accessory means a company must join Apple’s “Made for iPod” program, which means negotiating a licensing fee to gain access to both the API as well as the necessary chips that must be included to “authorize” accessories to connect to an iPhone, iPod touch, or even the iPad.

The cost alone can be prohibitive, and only a few accessories have been produced so far.
Another roadblock is that the current implementation of the accessory API limits a device to communicating with only one app. Even if App Store developers wanted to add iControlPad support to their games, so far they wouldn’t be able to. (This misstep doesn’t just affect gaming accessories, either generalized sensors could be made for a variety of scientific applications, for instance.)

These roadblocks could also prevent products such as ThinkGeek’s iCade from ever becoming a reality.
The iCade purports to be a miniature classic arcade cabinet that you slide an iPad into. The cabinet includes stereo speakers and a classic joystick and buttons, which, when coupled with the iPad’s large screen, would make for the ultimate retro gaming device. The iCade would interface via the Dock connector with an iPad version of the MAME arcade emulator, allowing anyone to live out their own King of Kong kill-screen fantasies.

Though the product is actually a clever (and cruel) April Fool’s joke, Ty Liotta, ThinkGeek’s merchandising manager and head of custom product design, told Ars that it could very well end up being a real product.
“People would really like to buy it, and we have had many people e-mailing and requesting it be created,” Liotta said. “Our customers know we have turned April Fools items into real products before, so they know there is the potential there.”

Liotta was referring to one of last year’s April Fools products, a sleeping bag that claimed to be made of the “exact synthetic compounds needed to re-create Tauntaun fur,” ostensibly to keep you warm even in temperatures a low as those on the ice planet Hoth.

ThinkGeek got so many requests to make the product that it secured a license from LucasFilm and had them manufactured. (Ars art director Aurich Lawson counts himself among the many proud owners.)

Though there are software licensing issues and the current limitations of the accessory API for iPhone OS, Liotta is hopeful that ThinkGeek could work with Apple and perhaps game developers to make the product a reality.

“I did see a number of different products when I was at CES that use the Dock connector in all kinds of different ways,” Liotta said.

“I didn’t think we could convince Lucasfilm to let us make the Tauntaun sleeping bag and obviously that worked out.”

Over 2,000 customers have signed up on ThinkGeek’s Web site to be alerted whenever the iCade is available to order, and one customer even offered to fund 100 percent of the development costs to make the iCade a reality. Along with production of the iControlPad, it’s clear that gamers are willing to pay to enhance the gaming experience on Apple’s mobile devices.

Apple went through the trouble of filing a patent on a gaming accessory, but so far hasn’t produced one of it’s own. If Apple isn’t interested in making one, it should be working with product developers to make building these accessories feasible and allowing developers to build support into their games.