The National Bureau of Economic Research has previously indicated that the United States has been in a recession since December 2007. What is interesting to note here is that Symantec first reported that spammers were showing an interest in the slowdown of the economy in October and November of 2007, so this begs the question, “Can the focus of spam email be used as an economic indicator or barometer?” Let’s take a brief look at the recession (thus far) by looking through Symantec’s spam folder (a.k.a. the Symantec Global Intelligence Network).

While U.S. consumer sentiment remained unchanged in March 2010, if we take a look at the top ten subject lines for March 2010 containing economic keywords such as recession, economy, finance, and jobs. It seems that spammers have an optimistic view of the economy, with job offer spam among their top spam subject lines: 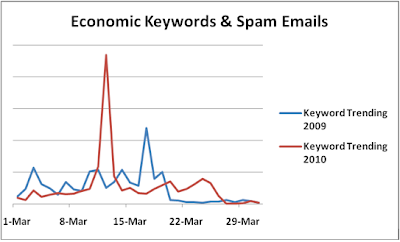 We have observed for some time now how spammers continually shift the focus of their emails to adapt to current events—natural and otherwise. It can be surmised that they adapt their campaigns because:

It is clear that spammers are in the business of trying to make money. Spammers are quite astute about adapting their campaigns to evade antispam filters and encourage unsuspecting recipients to click on a malicious link or purchase some questionable product or service. The economics behind spam dictate that the distribution of spam email is set to continue as long as distribution channels remain relatively cheap, botnets continue to be active and shift locations, and spammers develop new and innovative ways to attempt to bypass antispam filtering. Perhaps the state of the economy is just another opportunity for them to try and evade antispam filters?