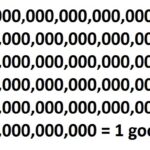 Tonight I’ve been talking to my friend about some bad news about Google company and he said “Did you know Googol is a number?”, Well, I did not! so I searched for it and found some stuff I did not know before, and I thought it might be useful for you too, so, What is the largest number that you know name of? here is the list:

Apart from million, the words in this list ending with –illion are all derived by adding prefixes (bi-, tri-, etc., derived from Latin) to the stem –illion. Centillion appears to be the highest name ending in -“illion” that is included in these dictionaries. Trigintillion, often cited as a word in discussions of names of large numbers, is not included in any of them, nor are any of the names that can easily be created by extending the naming pattern (unvigintillion, duovigintillion, duoquinquagintillion, etc.).

All of the dictionaries included googol and googolplex, generally crediting it to the Kasner and Newman book and to Kasner’s nephew. None include any higher names in the googol family (googolduplex, etc.). The Oxford English Dictionary comments that googol and googolplex are “not in formal mathematical use”.